German artist Josef Albers was associated with the influential Bauhaus school of art, both as a student and later as a teacher. In the Bauhaus school art, design and architecture were all taught and believed to be of equal importance. In 1933, after the Bauhaus school had closed Albers moved to the United States.

In 1949 Albers began working on what have probably become his most famous works, a series called Homage to the Square, in which he painted differently coloured squares nested within each other. 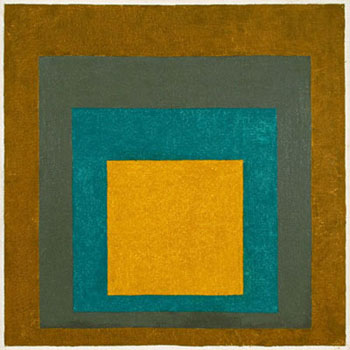 
Albers painted hundreds of variations of Homage to the Square over a number of years, each of which featured either three or four squares placed inside each other, the spaces between them measured in very regular increments.

As the composition didn't vary from one painting to the next, Albers focused only on the chromatic relationships, or the way the colours in each square relate to and affect each other.

In this way he was able to manipulate the illusion of space and depth in each work, and have the works project certain moods, depending on the intensity and hues of colours used, and how they were placed.

The Homage to the Square series is an example of serial art, where an artist takes a single set of rules to make an artwork and executes them over and over again to explore many possibilities.