Franz Kline was an American painter who like Mark Rothko, was associated with the abstract expressionism movement in New York. In common with other artists who embraced abstraction, his earlier work had been representational in style.

Although they were both involved with the same art movement, Kline's work is obviously very different in nature to Rothko's colour field paintings. Kline's is more typical of another form of abstract expressionism called gesture painting or action painting. In this form of abstraction the paint is splashed or smeared onto the canvas in an energetic or even violent manner, rather than being carefully applied. The physical act of painting itself was what gesture painters were most interested in. 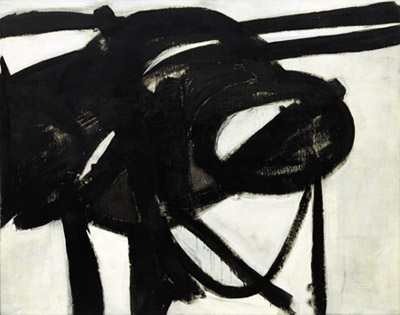 
Kline's paintings project a great feeling of energy and spontaneity, both from the lively brushwork, and also the extreme contrast between the whites and blacks in the composition. Despite their appearance of frantic gesture and spontaneity, Kline's abstract works were in fact carefully designed and considered before the finished versions were made.

Kline's works may look as if they are made from black paint worked over a white ground, but that isn't the case. He would work by painting in both black and white, laying them over each other until he was satisfied the work was finished. He maintained that the white in his canvasses was just as important to the image as the black.