Agnes Martin was an American abstract painter, often associated with the minimalist movement of art. Minimalism is a style that became popular in America in the 1960s, and is characterised by the use of very simplified, pared-down design elements. Martin preferred to be thought of as an abstract expressionist, an earlier movement based in New York in the years following World War II.

Martin's work was very delicate and subtle, often created by applying light washes of paint or drawing fine lines in pencil onto her canvasses. Her imagery often involved the use of structures such as the grid, lines or squares, reflecting the shape of the edges of the canvas. 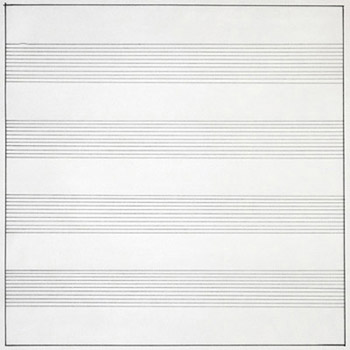 
In many of Agnes Martin's works she reduced the visual elements to series of parallel lines, covering the entire canvas or arranged into groups to form bands. They were drawn very sensitively onto the canvas, the weight of the line varying slightly along its length.

When viewed up close, the individual lines are visible but from further away they seem to dissolve, creating very subtle, tenuous fields of tone on the surface. This is intended to give the viewer a serene, contemplative experience while considering the work.

Martin had stated that the intention with her works was to break down form, and that they were about light, lightness and merging.

Many works of abstract art feature grids, or series of horizontal or vertical parallel lines drawn or painted on the canvas. This approach to designing a composition is sometimes called deductive, because the forms are deduced from the edges of the painting. This emphasises the idea that the work makes reference only to itself, unlike in representational art.