Dutch artist Piet Mondrian was an early pioneer of abstract art. Before his work became fully abstract, he painted a series of images of trees in a realistic style. Over time, the paintings became more and more abstracted as he became interested in the vertical and horizontal lines formed by their trunks and branches. Many other artists at this time in the early twentieth century, such as the Cubists, were also challenging and abandoning the traditional methods of realistic painting. In his early abstract works, Mondrian no longer painted the trees but the horizontal and vertical lines remained, painted on a background of white paint.

In later compositions, Mondrian's black bars remained, but now spanned the entire canvas and defined large rectangular regions. Some of these were left as the background colour, and others were painted in with other colours, usually the primary colours of paint: red, blue and yellow. Mondrian was associated with a group of artists and architects founded in the Netherlands in 1917 called De Stijl. They were concerned with reducing design to very basic abstract forms and using very few colours to give their work a universal quality. 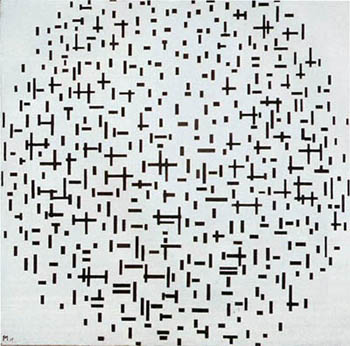 
This 1917 Mondrian painting is composed of only two types of elements: horizontal and vertical bars, which are painted over a white background. Even though there are only two types of bar, they appear in different lengths, and some are thicker than others.

In some areas, the bars are crossed over each other, and in others they are kept separate. Also, they are more densely grouped in certain parts of the canvas, while in the corners there are none at all.

In abstract art, the background colour of a painting is often referred to as the ground, while shapes or other elements painted over this are called the figure. Artists often exploit the relationship between the figure and ground in their works, using it to create a suggestion of depth within the picture, or even to create optical illusions. 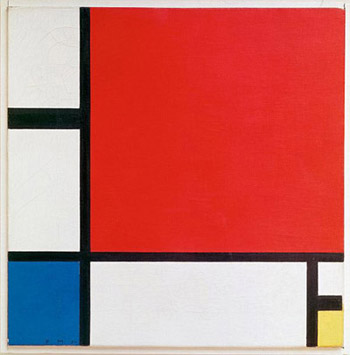 
This later work by Mondrian looks quite different to Composition with Lines, but they still have aspects in common. All the visual elements are still either horizontal or vertical, and the black bars are still there. As before, the image is made up from a combination of smaller parts, but they are arranged very differently now.

The scattered, dispersed quality formed by the black bars before has been replaced by a grid structure covering the entire canvas, creating a greater sense of stability and order. But also, the areas of very intense primary colours form a dynamic contrast to the more neutral black and white areas.

In art, the picture plane refers to the surface, usually rectangular, enclosed within the edges of the canvas in a painting. All the visual elements of a painting lie inside the picture plane. In this work the rectangular areas of paint, or colour fields, are of different sizes and colours. This makes the composition assymmetrical.