Jackson Pollock was an American Painter who like Franz Kline was associated with the abstract expressionism movement. Also like Kline, he was considered to be a gesture painter and is perhaps the most famous exponent of this particular style.

Though they are both considered to be gesture painters, Pollock's approach to composing his works and actual painting technique differed greatly to Kline's. He developed a very particular style known as dripping, where the unstretched canvas was laid on the floor of his studio and the paint was dribbled onto it from a brush or stick. In this way he worked without ever making contact with the painting's surface. Pollock further broke with tradition by using industrial enamels and aluminium paint in his works, as well as the more traditional oil paints. 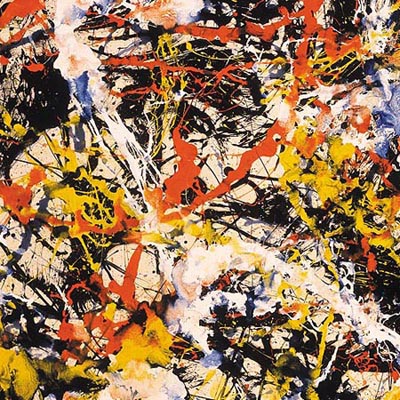 
Much like Rothko, Pollock's paintings were often very large in scale, so when considering them the viewer would feel enveloped by them, losing themselves in the complexity of the delicately interlaced paint trails.

To work on canvasses of such a large size, Pollock had to literally place himself inside the paintings as he worked, moving all around the canvas as he intuitively, yet very skilfully applied the layers of paint.

When Pollock was working on the canvasses, he didn't see them as having a specific orientation, but treated all areas of the canvas equally. He would only decide which way to hang the painting after it was finished.

Pollock's approach to composition became known as all-over painting, where there was no hierarchy between different areas of the surface and all areas were treated much the same. This is different to approaches that had gone before, where artists created visual elements of varying sizes and shapes in different parts of the painting, to set up interesting tensions and harmonies between them.