Bridget Riley is an English painter who is a very important figure in the Op art movement. Op art, or optical art is a style of abstraction that uses geometric forms, often in black and white, to create optical effects. Riley's work featured in an extremely popular exhibition called The Responsive Eye in The Museum of Modern Art, New York, in 1965.

Op art exploits the workings of the human visual system to create energetic, sometimes uncomfortable visual sensations. Works of op art often utilise a clean, crisp aesthetic, and can produce sensations of movement and vibration, or give the impression that the two dimensional surface of the artwork is being warped or bent. 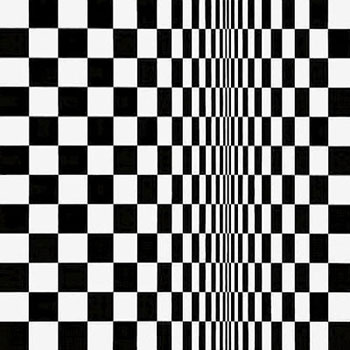 
In Riley's works the entire picture plane is often covered with the same geometric elements repeated over and over, often alternating between black and white. This sets up a rhythm in the viewer's eye and mind which she can then deviate from in certain areas to achieve dramatic, or more subtle results.

In this case, the gradual narrowing of the squares until they become thin lines and their subsequent widening again makes us perceive a severe curvature in the 2d space of the picture plane. The fact that we know the canvas is in reality flat creates a strange tension in the viewing experience. 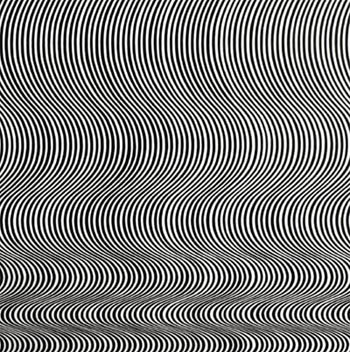 
Riley has stated that rhythm and repetition are the key to suggesting movement in her art. In this piece there's a regular rhythm in the bands as they change from black to white across the surface. But there's another sort of rhythm from top to bottom as the lines wave left and right. This wave is relaxed in some areas, and tighter in others.

It's through this changing of pace, where the eye is allowed to relax, and then becomes overwhelmed again, that the work gives off such a strong sense of energy and life.